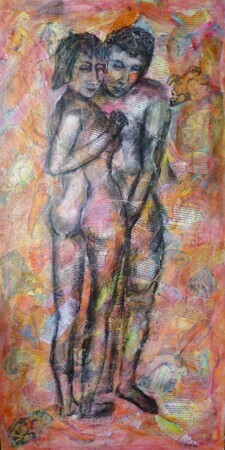 Inquire about this work

“In 1748 “Memoirs of a Woman of Pleasure” also know as “Fanny Hill” was published. It was considered to be the first pornographic book. The authorJohn Clealand was arrested and charged with “corruption of the kings subjects”

It was not until 1960 that an unexpurgated copy of “Fanny Hill” was published. Subsequently a charge of obscenity was issued against the publisher. The defence argued that Fanny Hill was a historical source book and that it was a joyful celebration of normal non-perverted sex—bawdy rather than pornographic. It wasn’t until 1970 that the book was republished.

This art piece juxtaposes the writings and images of the book with contemporary sexual internet letters and personal thoughts.

I am exploring the issues of freedom of sexuality and questioning the boundaries of my own sexuality.

Where are your sexual boundaries?”